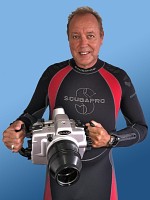 Udo Kefrig is an ambitious underwater photographer and diving Instructor. For more than 30 years he has been travelling to tropical destinations and has explored many local lakes and rivers. He has received countless awards for his photography from national and international magazines. As a free-lance contributor he works extensively for the German diving magazine "unterwasser" and he is co-author of many travel and diver's guides as well as several published books about wrecks.

Wrecks are indeed his favourites and he spends most of his time exploring them.

Rose Kefrig has been diving since 1984, and her passion for the underwater world are filigree creatures, wrecks and big fish. As an author, assistant and wife of Udo Kefrig, she accompanies the team on many of their travels. Her perseverance and joy in life are contagious, and she is responsible for the organisation and administration in German and English.

Hidden Treasures in the Lily Pond

Discover the Silent World beneath the Ice

Palau - A Haven and Nature Reserve for Coral, Sharks and Divers

Spell of the Deep Blue 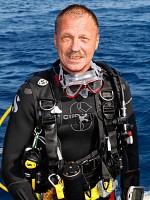 Claus-Peter Stoll started diving in 1972 before dedicating himself to diving and travel journalism four years later. In the scene, the experienced diving instructor was regarded as an expert for wrecks and the exploration of their history. Particularly in the Red Sea he was the first to discover the true identity of some of them. With passion and meticulousness, he worked his way through archives and museums on many new projects in order to obtain conclusive information down to the last detail. But most of all he himself liked to descend to the "Sleeping Ships".

The author and the adventurer

Claus-Peter Stoll passed away. So now I'm sitting here mulling over his obituary. Finding the right words is a tough task. But maybe it goes like this: it was just strange to write the name the way I wrote it: Claus-Peter Stoll. This may be because I've known this chap for ages, since the early days of underwater in the mid-90s. For all those who knew him, Claus-Peter Stoll was rarely called Claus-Peter Stoll, instead he was known simply as "Stolli".

Let's start again. Stolli has died. He wasn't just an old hand at the game, but a true veteran, a pioneer and a genuine original, who has remained true to himself to the last despite all the recent trends in diving. Stolli had been diving since 1972 and only four years later devoted himself to diving and travel journalism. From 1972 Stolli was already diving and four years later he devoted himself to diving and travel journalism. The experienced diving instructor was regarded in the scene as a top expert for wrecks and the research of their history.

And rightly so: when it came to lost ships and their past lives, no-one could outsmart Stolli when it came to research and exploration. I don't know anyone who has been as passionate about archives and museums as he has been. And I also don't want to hide the fact that as an editor one would sometimes ask oneself how one should place all the knowledge in the magazine. It was particularly in the Red Sea that Stolli was the first to discover the true identity of some wrecks. Of course, he preferred to descend to the "sleeping ships" himself - to date there have been over 150 wrecks around the globe. It was not with one dive per wreck, but with many.

Together with his alter ego, the underwater photographer Udo Kefrig, the author explored the oceans and most dive destinations on this planet - which was documented in countless publications in unterwasser, its predecessor magazine UWF, other national and international magazines as well as in his own dive travel guides and interactive CDs. The work of the congenial team focused on the Indian Ocean, but also on the Indo-Pacific, the Pacific, the Mediterranean, the Red Sea, the Caribbean and the Atlantic. It is remarkable that they never lost their love for the native Freshwater. The professionalism of the two is documented by various photography and press awards, including the "Golden Igel", a German Armed Forces press award, which they received in 1996 for their report " Gestatten, Hartmann" about the navy mine divers.

Stolli was only 67 years old. He died a natural death after a long illness. However, the aforementioned words, indicate that the veteran had experienced more in his relatively short life than most of us will manage in 100 years. It was an adventurous, fulfilling life that has now come to an end. What's left for me to say? Definitely this: Rest in Peace.

Wolfgang Büttner first learnt to dive 1988. Since then he has spent many thousands of dive hours under water and for many hears he has supported and travelled with the Team Oceanpics. Regardless what is on the programme, whether it is tropical, cave, ice, deep or wreck diving, Wolfgang always participates with a good professional aptitude. His photographs have been published in many magazines, including books, other print media, online magazines and in general advertising.